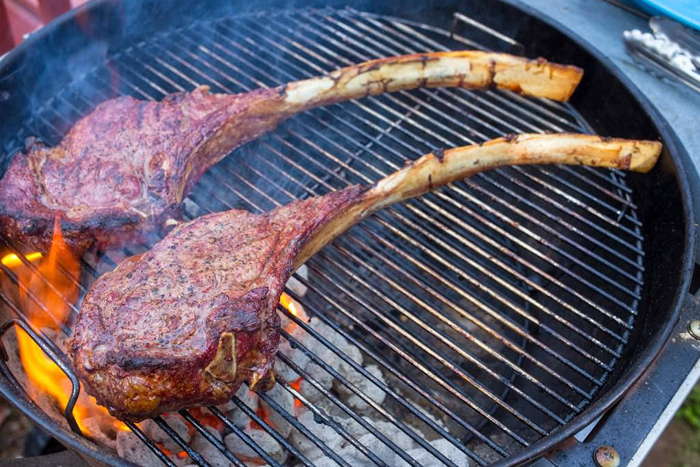 1. Season the steaks: At least an hour before cooking, sprinkle the meat evenly with the salt and pepper. This can be done as early as the night before; cover the steaks with plastic wrap and refrigerate, then take the steaks out when you start heating the grill.

3. Reverse sear the steaks: Put the steaks on the grill over indirect heat, away from the lit coals, with the bone side of the steaks facing the heat. Close the lid, and position the air holes directly over the steaks. Cook the steaks with the lid closed; after ten minutes, flip the steaks and swap them so the steak that was farther away from the heat is now closer. The steaks are ready for searing when they reach 115°F internal in the thickest part, about 20 minutes of indirect cooking. (115°F is medium rare. Cook to 105°F to 110°F for rare, 125°F for medium. Beyond that…buy a thinner steak.)

4. Quickly sear the steaks over direct heat: Move the meaty part of the steaks directly over the coals, with the bones hanging over the indirect heat part of the grill. Sear the steaks, flipping every minute or two, until they are browned and crusty, about 6 minutes. Move to a large (and I mean LARGE) serving platter.

5. Carve and serve: Let the steaks rest for ten minutes, then show them to your guests. Put the steaks on a cutting board and run a sharp knife along the curve of the bone to carve the meat from the bone. Pass the bones around as an appetizer (anyone want a rib?) and then slice and serve the steaks.