Sous vide is a preparation method that starts by cooking food for several hours in a low temperature water bath before finishing it on the smoker or grill for a traditional barbecue element. 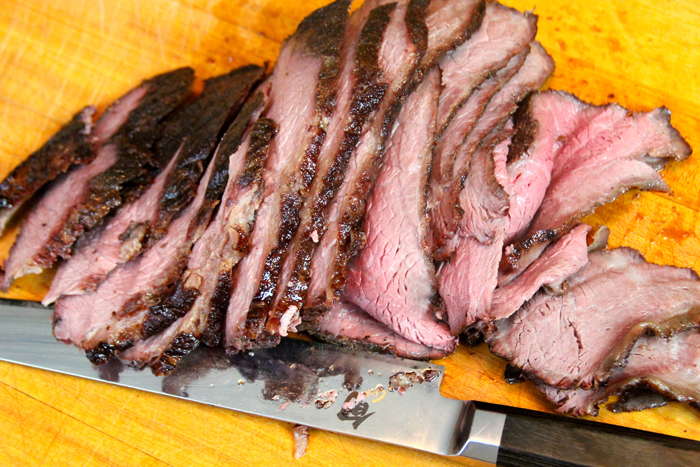 About the salt. Remember, kosher salt is half the concentration of table salt so if you use table salt, use half as much.

1) Prep. Season the roast with Kosher salt. If you can, give the salt 1 to 2 hours to be absorbed. The process of salting in advance is called dry brining. The rule of thumb is 1/2 teaspoon of kosher salt per pound of meat.

2) Prepare a sous vide immersion circulator, such as Joule by ChefSteps, according to the manufacturer's instructions and set the water temperature for 131°F.

3) Place the bottom round roast in a one-gallon sealable freezer bag. Carefully submerge the freezer bag in the water bath until most of the air has been removed and then seal the bag. Once bag is submerged, cook the roast for 30 hours.

4) After 30 hours, remove the bag from the water and submerge in a large container filled with a 50/50 mix of ice and water for at least 30 minutes to reduce the meat's core temperature to a safe range of 34-38°F. Refrigerate the bagged roast until ready to grill (up to two days ahead of time).

5) Fire up. Prepare a grill for 2-zone cooking. On a charcoal grill, place a chimney full of pre-heated charcoal briquets on one side of the grill's charcoal grate in order to create direct and indirect cooking zones. Adjust the grill vents to bring the temperature to about 225°F. Add 2 to 3 chunks of your favorite smoking wood to the charcoal for flavor. On a gas grill, adjust the temperature knobs so that one half of the grill is off and the other half is heated enough to maintain a temperature of approximately 225°F on the indirect side.

7) Cook. Once the grill is ready, remove the roast from the bag, pat it dry, and season with the dry rub. Place it on the cooler side of the grill as far away from the heat as possible. Set the lid on the grill with the top vent fully open and positioned directly above the roast in order to force the smoke over and around the meat. Allow the roast to smoke until it reaches an internal temperature of 125°F, about 1 hour 45 minutes. Note that the roast will already be cooked to medium rare from the sous vide step. The goal is to simply to reheat and smoke it without overcooking.

8) Serve. Remove the roast from the grill, slice, and serve immediately.